Rolls-Royce debuted Black Badge with Wraith and Ghost in 2016, followed by Dawn in 2017 then Cullinan in 2019 for a new segment of clients wanting to drive themselves. Today, a new, Post Opulent expression of Black Badge joins the family. The purest and most technologically advanced Black Badge motor car yet, Black Badge Ghost.

Throughout history, Rolls-Royce clients have had a strong desire for self-expression: one of the principal reasons they are drawn to Rolls-Royce, which offers peerless opportunities to push boundaries, redefine what’s possible, and challenge established convention.

Henry Royce overcame poverty, deprivation, and a lack of formal education to become a world-class engineer who created ‘the best cars in the world’.  Cambridge-educated The Hon. Charles Stewart Rolls was born an aristocrat but also pushed his own boundaries: he could have chosen a life of ease, indolence, and privilege, but opted instead for the grease, grime, and frequent peril of early motor-racing and aviation, becoming a leading pioneer in both fields.

The world today is characterised by VUCA, (Volatility, Uncertainty, Complexity, and Ambiguity). Increasingly, the bold and courageous are pressed to provide solutions in a turbulent landscape: the ‘disruptors’ – outliers, visionaries, and subversives who shape the world by doing things in ways no one else ever dreams – or dares – to try.  They reject suits for streetwear, use blockchain, not banks, and influence the analogue world through their digital endeavours. In doing so, they have created new codes of luxury that resonate with their sensibilities: darker in aesthetic, assertive in character, and bold in design.

One colour above all still consistently exerts a special fascination and powerful allure when applied to our motor cars – just as it has throughout the marque’s long history.  Black.

While Rolls-Royce is renowned for developing new colour palettes, the colour black has long been associated with power, strength, and authority.  It is intense and substantial. Black also speaks of elegance and confidence.

The Asia Pacific region now has one of the highest proportions of Black Badge in the world. Clients are now increasingly familiar with the mathematical symbol that represents a potential infinity, which is found within the motor car’s interior. This graphic, also known as the Lemniscate, was applied to Sir Malcolm Campbell’s record-breaking Rolls-Royce-powered Blue Bird K3 hydroplane and the marque’s designers nominated this hallmark for Black Badge motor cars to reflect their own unrelenting pursuit of power.

A new generation of clients desired a Rolls-Royce that was agile, discreet, highly connected, and free of any superfluous design. A minimalist new Ghost which is not just the most technologically advanced Rolls-Royce yet, but also the most aesthetically pure. In the twelve months since this motor car has been available, it has become one of the fastest-selling products in the marque’s history, representing more than 3,500 commissions worldwide.

The new design conversation has centered around ‘Post Opulence’, an aesthetic movement characterised by reduction and substance. In service to this, exceptional materials are selected and celebrated while the overt design is limited, intelligent, and unobtrusive. Some Rolls-Royce customers prefer a permanent cloaking of Black in a way that reflects their modern-day tastes and desires. It is the dark side of Post Opulence: minimalism in extremis.

Clients are free to select any of the marque’s 44,000 ‘ready-to-wear’ colours or create their own entirely unique Bespoke hue. However, the overwhelming majority of women and men who requested this darker expression of Ghost have selected the signature Black. To create what is the motor car industry’s darkest black, 100lbs (45kg) of paint is atomised and applied to an electrostatically charged body in white before being oven-dried. The motor car then receives two layers of the clear coat before being hand-polished by a team of four craftsmen to produce the marque’s signature high-gloss piano finish.

At between three and five hours in duration, this operation is entirely unknown in mass production, creating an intensity simply unattainable elsewhere in the automotive industry. It is this depth of darkness that serves as the perfect canvas for clients to add a high-contrast, hand-painted Coachline, which has done much to create the Black Badge ‘black and neon’ aesthetic that has come to characterise this vivid family of Rolls-Royce motor cars.

The iconic Rolls-Royce hallmarks such as the high-polished Spirit of Ecstasy and Pantheon Grille have been ‘subverted’. Instead of simply painting these components, a specific chrome electrolyte is introduced to the traditional chrome plating process that is co-deposited on the stainless-steel substrate, darkening the finish. Its final thickness is just one micrometre – around one-hundredth of the width of a human hair. Each of these components is precision-polished by hand to achieve a mirror-black chrome finish before it is fitted to the motor car.

The exterior treatment resolves with a Bespoke 21-inch composite wheelset. Designed in the Black Badge house style and reserved for Black Badge Ghost, the barrel of each wheel is made up of 22 layers of carbon fibre laid on three axes, then folded back on themselves at the outer edges of the rim, forming a total of 44 layers of carbon fibre for greater strength. A 3D-forged aluminum hub is bonded to the rim using aerospace-grade titanium fasteners and finished with the marque’s hallmark Floating Hubcap, ensuring the Double R monogram remains upright at all times. To celebrate the material substance and remarkable surface effect, a lightly tinted lacquer is applied to protect the finish but still allow clients to observe the technical complexity of the wheel’s unique carbon fibre construction.

Black Badge speaks of boldness but is not merely defined by aesthetics.

Advanced luxury materials have been meticulously created and crafted for a unique ambiance in the interior suite. While recalling the dramatic mechanical intent of Black Badge Ghost, the materials are true to Ghost’s Post Opulent design philosophy – one defined by authenticity and material substance rather than an overt statement. In this spirit, a complex but subtle weave that incorporates a deep diamond pattern rendered in carbon and metallic fibres has been created by the marque’s craftspeople.

Multiple wood layers are pressed onto the interior component substrates, using a black Bolivar veneer for the uppermost base layer. This forms a dark foundation for the Technical Fibre layers that follow. Leaves woven from resin-coated carbon and contrasting metal-coated thread laid in a diamond pattern are applied by hand to the components in perfect alignment, creating a three-dimensional effect. To secure this extraordinary veneer, each component is cured for one hour under pressure at 100°C. This is then sand-blasted to create a keyed surface for six layers of lacquer, which is hand-sanded and polished before being incorporated into the motor car.

If specified in the client’s commission, the Technical Fibre ‘Waterfall’ section of the individual rear seats receives the Black Badge family motif: the mathematical symbol that represents potential infinity known as a Lemniscate.

Aesthetes from the marque’s design team elected to further enhance the noir ambience of Black Badge Ghost by subduing the brightwork. Air vent surrounds on the dashboard and in the rear cabin are darkened using physical vapour deposition, one of the few methods of colouring metal that ensures parts will not discolour or tarnish over time or through repeated use. The Post Opulent principles of simplicity have also been applied to dramatic effect in the Black Badge Ghost timepiece design: only the tips of the hands and the twelve, three, six, and nine o’clock markers are picked out, in a subdued chrome finish, creating a remarkably minimal clock. Additional timepieces are available within Black Badge Ghost to suit the client’s aesthetic preference. 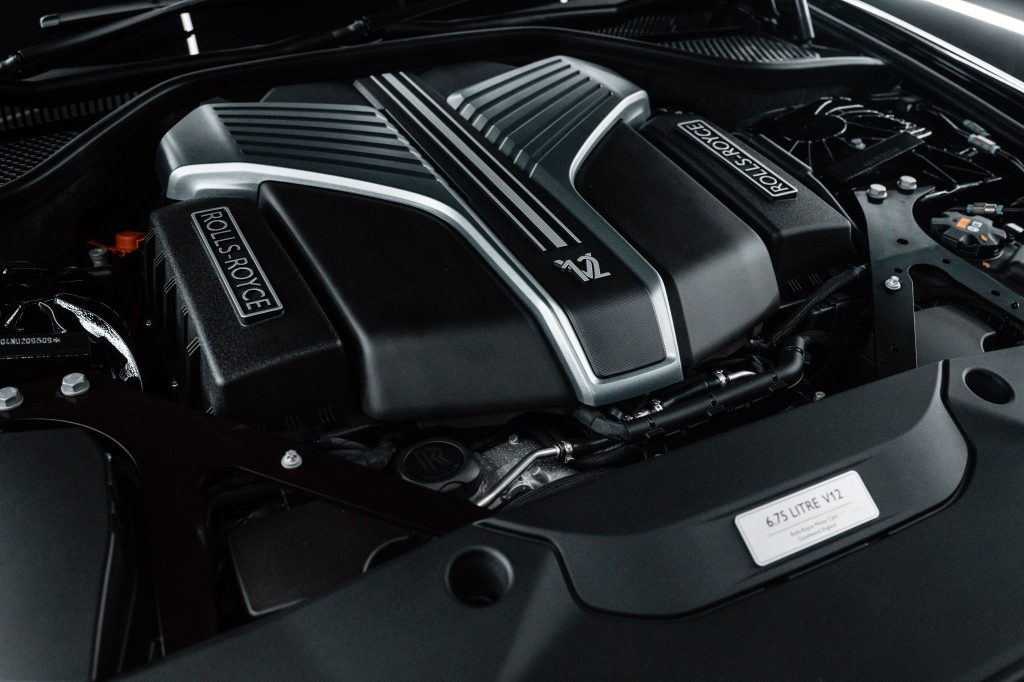 Black Badge has been designed to be an experience. The clients who requested this motor car demanded that the Bespoke treatment of Black Badge Ghost extend from the design atelier into the marque’s engineering department. In doing so, the Bespoke Collective of designers, engineers, and craftspeople collaborated to create a vivid driving personality that matched Black Badge Ghost’s visual intent without compromising the marque’s effortless ride proclivities and exhaustive acoustic tuning.

Key to its potent character is the Architecture of Luxury, Rolls-Royce’s proprietary all-aluminium spaceframe architecture that debuted with Phantom. This sub-structure not only delivers extraordinary body stiffness, but its flexibility and scalability allowed Ghost to be equipped with all-wheel drive, four-wheel steering, and the award-winning Planar Suspension system. For Black Badge, these peerless engineering qualities have been comprehensively re-engineered, including the fitting of more voluminous air springs to alleviate body roll under more assertive cornering.

The capacity of the Rolls-Royce twin-turbocharged 6.75-litre V12 engine was deemed sufficient. However, the flexibility of this celebrated power plant has been exploited to generate an extra 29PS, creating a total output of 600PS. The sense of a single infinite gear has also been dramatised with the addition of a further 50NM of torque, for a total of 900NM. The powertrain has also received Bespoke transmission and throttle treatments to further enhance the engine’s increased power reserves. The ZF eight-speed gearbox and both front- and rear-steered axles work collaboratively to adjust the levels of feedback to the driver, depending on throttle and steering inputs.

As with all products in the marque’s Black Badge portfolio, the ‘Low’ button situated on the gear selection stalk unlocks Black Badge Ghost’s full suite of technologies. This is asserted by the amplification of the motor car’s engine through an entirely new exhaust system, subtly announcing its potency. All 900NM of torque is available from just 1700rpm and, once underway in Low Mode, gearshift speeds are increased by 50% when the throttle is depressed to 90%, delivering Black Badge Ghost’s abundant power reserves with dramatic immediacy.

To bolster confidence when exploiting Black Badge Ghost, the braking bite point has been raised and pedal travel decreased. Non-Black Badge Ghost is provisioned with a robust braking hardware package that was deemed more than ample under extreme conditions, even accounting for the Black Badge alter ego’s increased power output. However, a new suite of bold high-temperature brake calliper paint colours has been developed in preparation for forthcoming Black Badge Ghost commissions.

Pricing in Singapore starts from SGD 1,468,888 (without COE). Rolls-Royce motor cars are commissioned, pricing is dependent on specification. 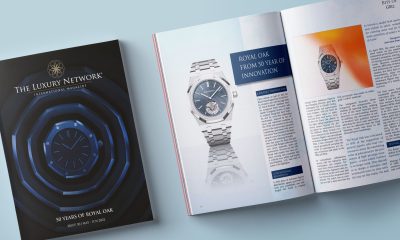